This Associated Press article featuring commentary from Stephan Galarneau, Livingston International’s head of small business, was originally published on May 1, 2018 and appeared in numerous publications, including the NYtimes.com, CNBC.com, MSN.com, ABC News and numerous other publications. 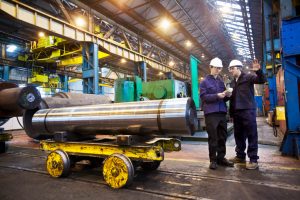 The Trump administration has so far avoided a trade fight with Europe by temporarily exempting it from hefty steel and aluminum tariffs. Yet the move also extends the uncertainty weighing on small businesses that use those materials, a much broader group than you might think.

For example, Gary Cammack, the owner of Cammack Ranch Supply in Union Center, South Dakota, is worried that he will have to raise prices on steel barbed wire that he sells to area ranchers, from $60.95 a roll to as high as $67.

And Erin Calvo-Bacci, co-owner of chocolate maker CB Stuffers, based in Swampscott, Massachusetts, is concerned that the duties will ultimately lead to higher prices for the steel tables, rolling racks and molds she buys.

Trump slapped 25 percent duties on steel and 10 percent on aluminum in March, citing excess imports that have hurt U.S. metals manufacturers and national security concerns. Yet he excluded the European Union and six other countries, easing the blow and leaving the tariffs imposed on just 30 percent of steel imports. On Monday he extended the EU’s exemption for another month.

The extension comes just as U.S. officials travel to China Thursday and Friday for talks on a separate trade dispute.

Amid all the uncertainty, here are strategies small businesses can follow to ease the blow of trade fights:

Many small businesses are simply unprepared for the disruption that could stem from a trade war with China, said Stephan Galarneau, vice president for small business at Livingston International, a consulting firm. That’s also true for other trade disputes, such as President Trump’s threats to withdraw from NAFTA.

“They’re not ready for a worst case scenario,” Galarneau said. “You want to avoid being passive about this.”

Many small companies may be more likely to get caught up in trade fights than they realize. Perhaps your firm doesn’t import raw materials or machinery from China, but what about your suppliers?